Dogecoin’s Short-while at the Top Charts

Dogecoin shot sharp at the 980% surge on January 28 and hogged the top 10 bunks, albeit, briefly. This was for the first time since 2015.

This steep rise has been attributed to a discussion in a Reddit group and a tweet by “WSB Chairman” who pressed the question to his 750,000 followers: “ Has Doge ever been to a dollar?”

In response, a monster rally of investors swept Dogecoin up in a flash-flood to hit the top charts in spite of no protocol upgrades or developments in Dogecoin since 2015. 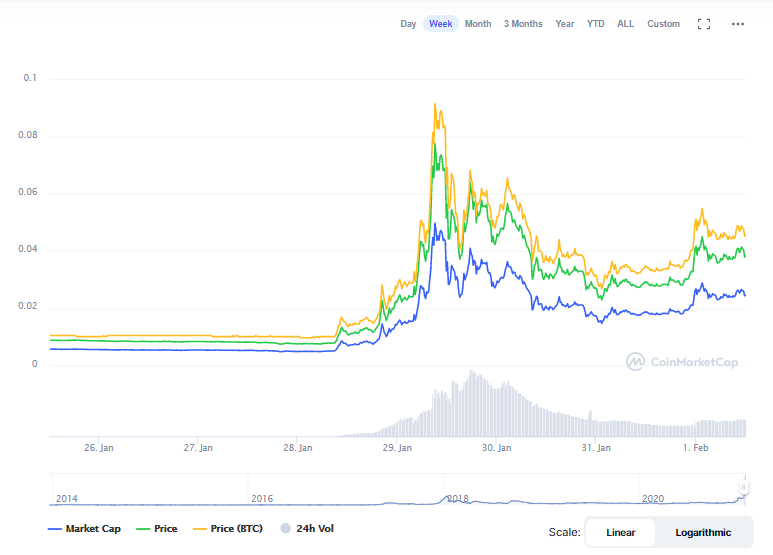 On a separate thread, Dogecoin has seen mention in over 90,000 tweets, surpassing those regarding Bitcoin (BTC)

However the 68% retracement, shortly following the peak at $ 0.087 bore semblance to the Bitcoin crash in December 2017; for Doge only took 24 hours while the latter happened over 50 days.

Also Read: Countries Issuing Their Own Digital Currency can be the Next Crypto Revolution

This sharp Doge trajectory is now understood to be engineered through a frenzied rally by organized social media groups who also stopped retail traders from buying AMC and Gamestop stocks. This sharp decline is indicative of the fleeting speculative frenzy that carried Doge to the top bunks but lasting for only 24 hours before the steep drop. January 30 and 31 saw a further pump of 80% Doge then finishing the month lingering around $ 0.03

Despite the surge and the drop, the Dogecoin has accumulated a huge fanbase which includes the chief executive of Tesla, Elon Musk.

Dogecoin, invented by software engineers Billy Markus and Jackson Palmer, features a Shibu Inu breed of dog from the popular “Doge” meme. Introduced on December 6, 2013, it soon built its own online community and gained a market capital worth $ 5,382,875,000.

Dogecoin gained popularity during the 2014 Winter Olympics when the Dogecoin community managed to raise $50,000 for the Jamaican Bobsled team which had qualified but lacked the funding to participate in Sochi Winter Olympics. Inspired by this effort they also raised funds to build a well in the Tana river basin in Kenya.

Also Read: Bitcoin’s Price Could Rise $45K Due To Institutional Investment. What Happens When They Sell?

Clearly, since the Dogecoin rise and decline, social media will continue to be a key player by having the last word rather than being an “alternative” in the trading sector.