It could propagate a more effective distribution of central bank liquidity including in international settings and reduce financial risk globally. The use of CBDC may bring down annual expenses related to forex by $130 billion.

Also Read: Life of forex market in the upcoming years

The Troubles Faced By Forex

The forex constitutes the largest financial market and is the main user of central bank money. However, the foreign exchange currently faces a list of issues that need to be addressed.

1. It endures a long time lapse between trading and settlement.
2. It lacks transparency.
3. It entails surmounting high risks.

The Risks and Settlement Methods of Forex Market

The main risk in foreign exchange trading is the settlement risk. Settlement risks eclipse the credit risk and liquidity risk.

Credit risk happens when counterparties fail to deliver the currency or default on a Vostro account claim when subject to an insolvency procedure.

Liquidity risk arises when the counterparties do not settle the full value in time, thus, disabling the payee’s capacity to meet their own requirements. Thus, demanding an alternative resource to mobilize funds for immediate commitment at a short notice. This also reduces the ability to reuse committed funds.

The tokens are programmable. This allows them to root- in the much-needed prudential and other monetary policy and financial stability parameters to protect and discipline CBDC circulation. CBDC is also viewed as a substrate for further financial innovation with extended support features for the token-based financial ecosystems. This also encompasses settlement in the token-based financial market infrastructures and propels greater diversification in payments.

The issuance and trading of CBDC are best attained using a permissioned distributed ledger technology (DLT)-enabled network to ensure optimum performance, security, transferability, and privacy in transactions. The issuance of CBDC would be solely under the guardianship of the central bank. However, the network is to be maintained by the central bank and a number of resident financial institutions serving as operators of network nodes that validate and record all transactions. The tokens are to be controlled by private keys stored in electronic wallets. The electronic wallets could be held outright or via a custodial relationship included by resident banks of the issuing currency country.

The adoption of tokens sanctions the simultaneous execution of trading and settlement in one transaction; enabling instant and atomic settlement through simple exchanges of tokens (atomic swaps). The programmability of tokens assure that transactions are instant and are committed only upon meeting certain conditions.

The atomic swaps would enforce the risk mitigation measures and preclude any deferment between trading and settlement. This ensures both currency legs are available at the same time and allow for real-time reuse. Liquidity management would be eased as trading positions would not impede liquidity against the immediate availability of funds.

Use Cases of CBDC and Forex-Related Trading

The use cases depicting the relationship of the two important financial instruments are illustrated below.

The entities participant in the possible transactions include:

The possible transactions include (Figure):

1. DB1 exchanges reserves for a domestic CBDC at the domestic central bank.

2. DB2 sells a security to DB1 against domestic CBDC in an instant and atomic DvP transaction

3. FB1 exchanges reserves for a foreign currency CBDC at a foreign central bank

4. DB2 sells domestic CBDC to DB1 against a foreign currency CBDC in an instant and atomic PvP cross-border transaction

5. DB1 sells a security to FB1 against domestic CBDC in an instant and atomic DvP cross-border transaction

6. FB2 exchanges reserves for a foreign currency CBDC at a foreign central bank

8. FB1 sells a security to FB2 against domestic CBDC in an instant and atomic DvP off-shore transaction

10. (A) FB1 sells domestic CBDC to DB2 against foreign currency CBDC in an instant and atomic PvP cross-border transaction

11. (A) DB1 exchanges domestic CBDC for reserves at the domestic central bank

(B) DB1 sells domestic CBDC to the foreign central banks in an instant and atomic DvP cross-border transaction. 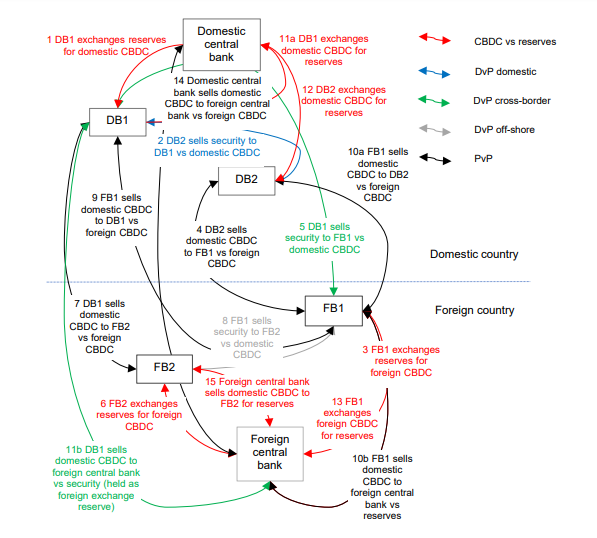 The DLT-enabled networks seek to provide the much-needed features and options, and security to control access, trading, and settlement. The marked separation of network operators and wallet holders enables a two-tiered approach in foreign exchange trading that allows seamless transactions between resident and non-resident entities while maintaining operational autonomy with resident entities. It seeks to protect existing regulatory and supervisory reign while extending reach.